Our fairstand has a long history, rich in the tradition of being a mission minded project.

It was more or less started informally around 1939 by the Liberty Crusaders in a tent south of where the Floral Hall is. Back then, horse racing and harness racing were the main attractions at the fairgrounds. Egg salad sandwiches were the main seller, and we began the tradition of bringing in a watering trough filled with ice and pop which was the only place at the fair to buy a cold drink. In 1947 the tent was moved to the south end of the grandstand.

In 1965 the Fair Stand was moved to a Semi-permanent structure (it still had a canvas roof) on the north end of the grand stand. That fall the stand burned down in a grass fire. The following year the stand was rebuilt as a permanent building in the same location. In 1969 the building was jacked up and moved to its present location. This move was at the request of the Fair Board to make room for more bleachers due to the increasing popularity of stock car racing. The dining area was added on after the move.Each year we spend roughly 800 volunteer man-hours at the fair stand serving pulled pork sandwiches, hamburgers, hotdogs, French fries, assorted pies, and cold drinks to earn money to support several mission projects throughout the year. 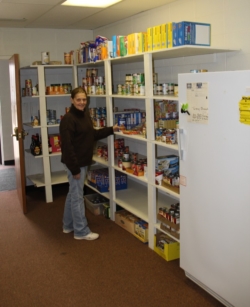 In 1977 the ecumenical Voluntary Action Council was established to meet the needs of those less fortunate in the community. This program is supported by area churches, service organizations and concerned citizens in the West Liberty, Atalissa and Nichols area.

Items for Christmas food boxes (about 90 each year) have been sorted and packed in our fellowship hall and distributed to many area families and senior citizens annually since that time. In 1983 the Permanent Food Pantry was established at First Church United. The food pantry is open every Saturday morning and serves approximately 400 individuals with food each year.

Our Kids Against Hunger ministry was begun in 2010. We purchased the equipment for two assembly lines for packaging food. Each finished bag contains six nutritionally balanced meals. The food is shipped to areas of extreme poverty throughout the U.S. and the world. This ministry is funded by individuals and groups in the community. Likewise, volunteers from any organization are welcome to use our equipment and/or to fund purchasing of bulk food.

The Welcome Table ministry began in December of 2011. It provides a hot, nutritious noon meal each Saturday from December through March. The meals are free of cost and everyone is welcome. Volunteers take turns preparing, serving, and cleaning up. This ministry is funded through First Church United’s Endowment fund and individual donations.